This is Fern.
She’s a homeless young adult who is the last of the, until recently, wealthy Kingston family. Fern was forced out of Moonlight Falls by the passing-away of her grandmother, and the huge debts her gambling father left after his death.

Fern has escaped into Sunset Valley. It’s a picturesque town by the sea, nestled in between rolling green hills, full of sunshine and families playing on the beach. It’s a wonderful place to live.

Too bad she hates the outdoors, is a couch potato, and a snob!

Since all her inheritance and things were taken by debt-collectors, Fern has zilch Simoleons. Her only possessions are the clothes on her back and, strangely, her phone. The money she did have was used up to hail a taxi, which deposited her at Sunset Valley Central Park.
This is her new home.

Fern takes a deep breath and looks around the park. A fountain plays in the center, circled by blooming margaritas and rustling trees. The air is sweet with fresh-cut grass and coffee from a nearby bistro. A set of swings creak gently in the salty breeze. The whole scene is disgusting.

She takes to the public toilets, which is the only place she won’t be plagued by nature. It is a sunny day but this lowers Fern’s mood. Luckily, a random Sim is having a picnic nearby. It looks like he’s not hungry, so she sits down and starts eating without a word!

For a while the man seems oblivious of this stranger eating his food. I think he’s deep in philosophical thoughts about life, which is good for Fern. From her ‘nom nom’ sounds those hot dogs sound great.

However, the Sim eventually notices and tells Fern to scoot away and leave him and his hot dogs in peace. I think he was meditating with his food.

Fern has learnt her first lesson today; do not go and eat stranger’s picnics.

She goes over to the swings, but she’s a little confused on how they work. Fern’s never been on one before, as she was always holed up inside as a child.

She soon gets the hang of it, though, and Fern discovers that it’s actually quite fun. She swings happily for an hour or two, so she starts to feel sweaty and hungry. But she’s also discovered the joy of such a simple action, and that’s just what I want.

She sees a somewhat suspicious looking lady and asks her where the nearest shower and food is. The woman points towards a modern complex just across the road. “You have to get a gym membership, though. Well, you look… like you need it.” How rude.

Fern thanks her anyway. Good, at least she still has some manners. She heads towards the 28 Hour Wellness Gym, which smells like soap and chlorine.

The gym is full of noises, and splashing from the indoor pool. Heading up the staircase, Fern enters a loft where several fitness machines are placed. The fact that she notices the T.V before the shirtless man in the corner scares me a little.

So Fern watches the T.V for a while, as she’s a couch potato. But then the Hopeless Romantic in her notices the blonde buff man next to her.

I tell her to say hello as she seems a bit shy. We find out that his name is Xander Clavell, and that he is single. Yay! Unfortunately, Fern tries her hand at flirting.

It does not go well. Xander insults her about her laziness.

I’m starting to feel sorry for Fern by this stage, so I send her downstairs to eat some icecream.

Oh dear. Fern is feeling humiliated, and even as she eats her favourite treat, she looks sad. I think maybe the laziness insult has really hit too close to home. She returns the park as stars begin to blink like electric light bulbs in the sky.

Fern has been sitting here for a while, the cold seeping into her, when this random man comes and eats a hot dog right in front of her. She seems to feel a bit awkward so she gets up and leaves. It’s time, anyway.

It’s very early in the morning now. I wonder where she’s going? 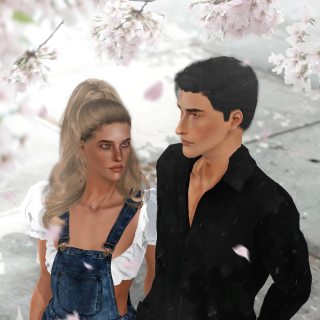 The Kingston Legacy
Welcome to SimBora!